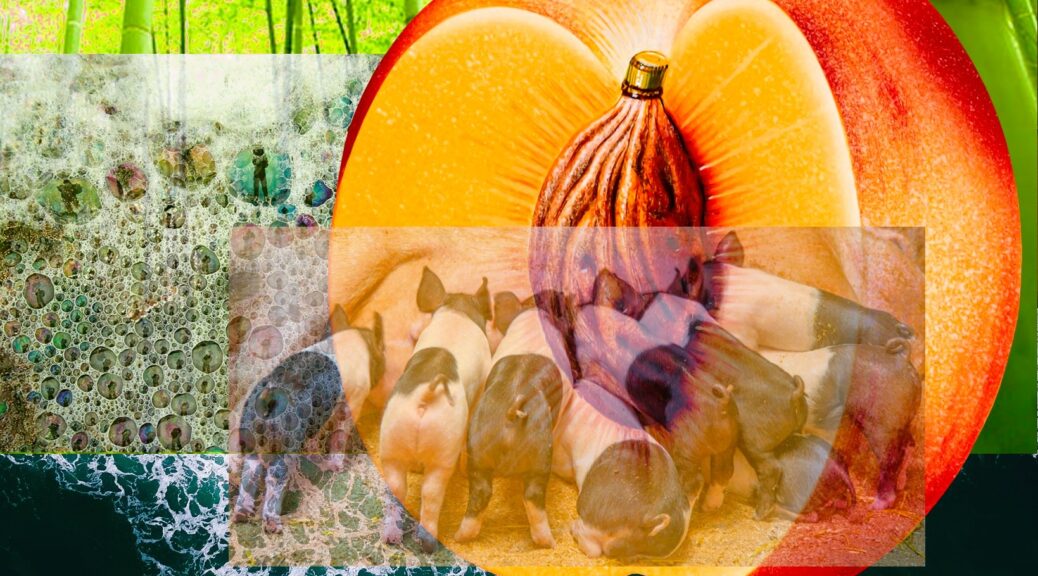 From Zeus’s head, from Jupiter’s thigh, a child was born.

Ash, Elm bore young ones. As did a glowing stalk of bamboo, sea foam, night, dust, a bone, a giant peach, a block of salty ice licked by a cow. A rock bore light. Maggots in giants’ flesh became children.

Some were impregnated by sun beams, wind, and golden rain, by lightning, dreams of sun, and a bundle of feathers, by a footprint, by leaning against a plum tree, and by devouring an abuser’s genitals.

By her father’s genitals cast in ocean waves Venus was born of foam.

And that is just one entry in Wikipedia on “miraculous birth”! Think of the sci fi solutions already written.

As Edmund Spenser wrote at the end of the sixteenth century:

“Historically, women were known to prevail in battle where they were likely to have great exploits and to be victorious

So, women put their weapons away and excelled in government and academia instead” [Faerie Queene, Book III, Canto II].

By the nineteenth century, such constructs were forgotten, were deemed natural. Were “God given.”

Now, after centuries of social justice movement and theory this artificial inequality had begun to crumble. The arbitrariness of the hetero-dyad and the nuclear family norm had become obvious and indefensible.

No wonder the early 21st century saw a violent imposition of that model.

As Judith Butler wrote in Undoing Gender, “the task of all these movements seems to me to be about distinguishing among the norms and conventions that permit people to breathe, to desire, to love, and to live, and those norms and conventions that restrict or eviscerate the conditions of life itself…What is most important is to cease legislating for all lives what is livable only for some and, similarly, to refrain from [requiring] for all lives what is unlivable for some.” SIA had taken this as its question: “what maximizes the possibilities for a livable life, what minimizes the possibility of unbearable life.”

Among the powers we needed for this ideal was a method for reproduction that was truly a choice, one supported structurally, one not required of a woman’s body, one liberated from the claims of seed, of bio-kinship, of patriarchal lineage, of enframement, of slavery, of isolation from the safety net.

We needed to remember how to receive each offspring as magical gift, as bringer of insight, as sign of health, as love embodied.

Summer 2022. The golden women responded to the post-Roe crisis in the United States just as they had helped refugees of authoritarianism and climate crisis globally: they used their privilege and their vast wealth to fill gaps in policy.

CNN estimated that there would be 180,000 unwanted babies born every year in 26 states with no social safety net for these children, let alone their families.

The golden women of SIA were ready for them. They had already created the alternative structures we needed to support thriving.

Here, their underground storing, sharing, transferring network quietly moved, moved women seeking procedures, collected tissues, and, when this failed, supported women and children, incorporating them into the grand vision, into the arms of fictive kinship, where they could be relieved, nurtured, healed, and protected from further trauma.

The primary goal was to stock the arks with future generations of humans who would be born to the various projects of the Multiversity.

Circe and Persephone were products of the Chaos Project, born in Texas and Mississippi in the Fall of 2022, their brave mothers among many lost on the birthing room table as maternal mortality rates soared, especially for women of color.

The were the youngest among us, only 7 when they buckled themselves into the shuttle with us.

Little Priestesses, murmured Juno as she placed a warm hand to each beloved cheek: Circe with her pet pig, Persephone with her calico cat.

They would receive the Wiki in 10 years. They would help us to guide the first generation born on the awaiting ark.

They would remember Earth with us, Earth in all her wonders still apparent on the day we said goodbye and watched her become the blue marble we had known in images all our lives.

What Circe had not expected was the thrill of the stars rushing toward her. It seemed to her that she was reeled in by them, by magical silk skeins of invisible thread like the fibers of her largest muscle, like the nerves that electrified her, like capillaries, veins, arteries that brought her breath.

She knew she was made of star stuff. She could faintly remember. She did not fear death, though she had been protected from it. It had been her fate.

Death is but a portal, she knew.

She patted her pig who she called Daddy O, with a knowing smile, having been reared on the legend of her own name.

Snort, snort, Odysseus replied, smart enough to know she had her own pig’s part to play.

On this ark, all took the pronoun she.