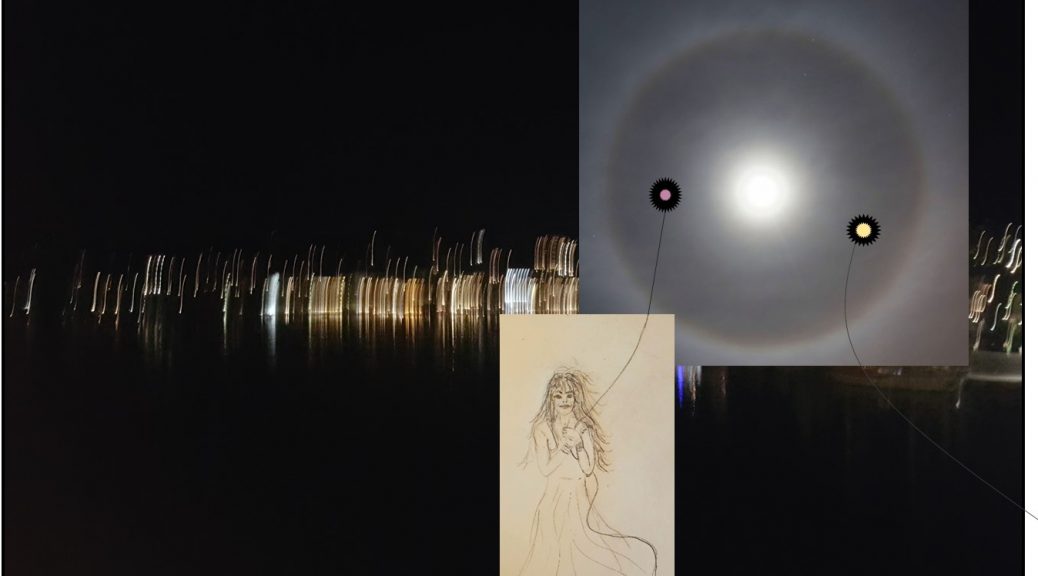 “fashion worlds of pleasure, joy, disruption, and refusal organized by the social desire for transformation.”[2]

Red Mars, golden Saturn, bright Jupiter. The moon in mystical rings before the rain. All of it moving our electrons across 2500 miles and decades. Or Friday, 8 miles down the road. We let our hearts feel the connections. We let ourselves live on silken bridges between.

Part of what we needed to do was envision our world.

We did not need to start from scratch. There was a lot to read. There were friends all around the globe. Reaching into the past, to traditions resilient within this: the toxic form of power now heavy on us. Now restricting us. Now coming to our homes and disappearing us. Now burning us in effigy. Now sheltering us from the pandemic.

In our studies, we came home to the sharp, sweet, new old regimes of identity, in places and times on our own planet. Some had been nearly forgotten, others never fantasized, or seen only on stage and in art. In a snippet of film by a visionary who had been taken from us by AIDS. Sometimes we lacked language to describe and so, we learned languages, until we could design in tongues new to us.

It took courage to recognize. To reiterate. To build from the remnants.

You see, we were leaving, but we would return one day. To Earth. In more than a millennium. We would hope to bring a new way with us when we did.

But first, we would have to go. And so, we walked in the woods. Breathed in rain. Put bare feet on the ground. Slipped our clothes and walked into the waves, into the current of river, the stillness of lake. We savored.

The sun we noticed lit up our lashes, as in lazy spring days in college, lounging on a lawn with friends.

And those friends were the ones we first dreamed with. In the arrogance of youth, still shocked at what we were learning, at how much was wrong. We leaned over small tables and scones and cappuccinos, to expound. Or leaned back against the greased smooth wood of benches, to listen.

We noticed each other’s eyes. The lines now on our faces, from smiling and kindness and thought. Deep in our sockets we looked into one another and saw histories’ sorrow. We saw one another as brave.

So consider: what do you need for a transfeminist, post white supremacist, decolonized utopia? If you could make a cuir planet—What are the new values? Who do you look like? How do you refuse and disrupt and please and enjoy and transform? How do you “shift from one world to another”?

We took care about these things. We took garbage so we did not need to extract. And we spent all the golden women’s pentacles on this, to churn a new wealth for the future, to feed mycelium, to build our crafts.

In the tarot, The Star is a card identified with Aquarius, the weirdo, the visionary, the star being. It is the card of healing. Of reaching beyond what is. Of envisioning. And of meeting one another under the same moon. For now while we fashion worlds.

And one day, from the multiversities, who satellite near the same far sun.

[1] “I use the word nepantla to theorize liminality and to talk about those who facilitate passages between worlds, whom I’ve named nepantleras. I associate nepantla with states of mind that question old ideas and beliefs, acquire new perspectives, change worldviews, and shift from one world to another.” Gloria Anzaldua, this bridge we call home: radical visions for transformation (2002), 2.

[2] Macarena Gómez-Barris, Beyond the Pink Tide (2019). This entry and the cuir-er than queer aspiration in it is humbly inspired by the work of this college friend.